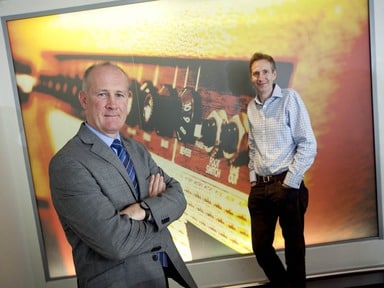 Dublin:  May 13th, 2014:  Faced with a massive growth in data, the Irish Music Rights Organisation (IMRO) has built an automated system to track copyrighted works and deliver royalty payments using Microsoft Cloud Operating System platform.  Due to massive growth in the amount of data being generated to process and capture information by IMRO customers as well as being faced with the rapid influx of new devices and ways consumers were accessing music, IMRO needed to implement a secure IT solution that was easy to use and which managed the ever increasing amount of data and data sources.

“Data volume is exploding,” according to Victor Finn.   “We needed to keep pace with the ever increasing evolution of online data.  We are continuing to see increases in new forms of data from a large host of suppliers, including online music streams such as Spotify. We are experiencing a vast number of ways in which music is being accessed via a poliferation of new devices such as smartphones and tablets,” said Victor Finn CEO IMRO.

IMRO looked at buying new servers but found that moving to the Cloud would give them greater flexibility as well as reduce capital expendature year on year.They looked a  variety of models and saw that a subscription model enabled them the economy of scale which proved a secure, flexible platform necessary to process the increasing volumes of data they were challenged with.  Microsoft’s Cloud OS uses Microsoft SQL Server to manage the growing number of databases and Windows Azure to securely develop, manage and store critical information. This enabled IMRO the capability to adapt to new sources of revenue withouth having to re-engineer their existing software systems and reduced their up front capital spend, saving the not-for-profit organisation and its members time.

“The platform-as-a-service solution delivered by Spanish Point Technologies gives members a secure, easy to use sign-on capability enabling them to quickly upload their work so that they get paid for their use of without any delays,”,” commented Victor Finn.

The solution, was designed by Spanish Point Technologies’, experts in modern software development technology. IMRO licensed the software to their affiliate in Canada, and Spanish Point are also in discussions through IMRO with a number of other music rights organisations across Europe to deliver thesolution on the integrated Microsoft Cloud O/S platform.

John Corely, CTO of Spanish Point Technologies elaborated on the system and why it works.

“Moving to Windows Azure enabled us to re-architect key aspects of the solution to boost performance.  A process which took 3 to 4  days to run now takes under a day.   Calculating royalties based on all radio plays, TV programs and online downloads is a massive task, and requires a significant amount of data.   As well as supercharging performance, Windows Azure enabled us to build in high availability based on geo-redundancy at a fraction of the cost of more traditional approaches.  It also enables IMRO to scale their solution cost effectivly as the number of data sources continue to increase

John Corely added, “We are now able to provide IMRO with complete end-to-end support for their entire solution including Windows Azure,SQL Server, Sharepoint, BizTalk and our custom developed application. IMRO now has a single contact point for any system related issues covering the application layer right down to the OS.

Why Microsoft Azure for ISVs
How ISVs can utilise Kubernetes on Azure to Build Resilient Ap...
How ISVs can Embrace DevOps to Accelerate Innovation